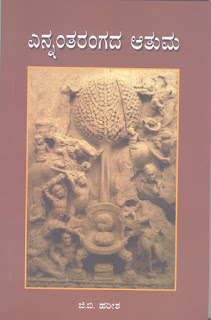 This is my third book on vimarshe.published from Christ university Kannada sangha.
Posted by Third eye at 10:23 PM No comments: 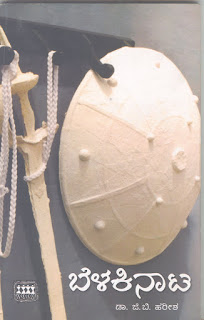 This is my first book on vimarshe-literary criticism.The coverpage is done by welll known artist Ravikumar Kashi.This book was published by D.V.Pahlad of Sanchaya little magazine with all love.
Posted by Third eye at 10:18 PM No comments:

Why Girish Karnad is wrong and Naipaul is right? 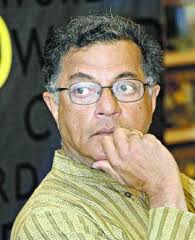 There is a word negationism used by Dr Elst.It means when you know that some is right and true still you deny both the fact and the argument.Girish Karnard has done the same.
Turks in the mediaval period attacked on Indian provinces of Sindh, Aghanistan, Baluchistan and Pakistan.This Arab and Turk invasion slowly gave away for the rule of Islam from Delhi.Gulami dynasty, Iltamish, Balban, and of course Girish Karnards favouritte protogonist Tughlaq ruled from Delhi.Karnard is defending Muslims?Who are those Muslims?Are they the muslims of the Past who plunderd Kashi, Ayodhya, Delhi, and the entire North India?Or they the normal rishwala, meat seller, workshop owner muslims that you & I find in every city of India?

Clearly when Naipaul mentioned about the wound caused by muslims he is referring to Babur who gave instructions at the order of a 'sufi saint' to destroy the Ram temple at Ayodhaya.Naipaul is clear.Both the stands can't be right when it comes to truth.


The problem of Karnard is intermixing the domains of knowledge.He is a creative writer, playwright and actor and  not a historian.But he assumes that he knows more of Indian history than anybody.One thing is clear whether you are a rightist, or leftist or centralist if you want to talk on Islam in India you need to understand the records available in Persian, Arabic and Urdu.Surely Karnard is miles away from these languages and the records.Also one needs to understand the diffrent namas(Baburnama,Akbarnama,Jahangirnama).Karnard has none of these equipments. 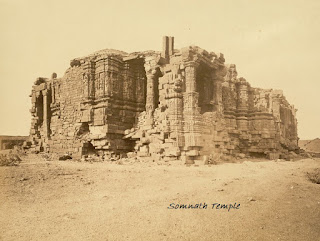 (picture of Somnath Temple dstroyed and looted by Muslim army)


Mr.Karnards problem is that he always takes Romila Thapar as the authority on Indian history.Already Siddhqui, R.C.Majumdar,Jadunath Sarkar had written before her but she who has mastered the art of negationism never took the pain to look in their writings.She dimissed them!This is her scholarship & Karnard relyes on her.In the recent 20-25 years voice of India a publishing house from New Delhi has done tremendous work to put the recors straight in the field of Indian history.But Bipin Chandras, Irfan Habibs, Romila Thapars, A.G.Nooranis, Khushwanth Sinhgs knows how to manipulate and play with the facts.Not even a single review appeared in any of the national dailies or weeklies on hundreds of well researched publications of VOI,thnaks to Romila Thapar and thier gang.Mr.Karnard is only a new comrade in to the red brigade.
Niether Karnad nor the secularist brigade which always protects the semetic or the Communist  imperialism
bothered to look in to the facts given by noted historians and well respected academicians and reliable journalists across the world.The khaji Nasrul Islams, Asfaq ulla Kahans, Nissar Amheds & A.P.J.Abdul Kalams are not muslims for them.No Indian who is sane has never questioned the honesty of any one of these,rather Hindus have bestowed lot of reverence and loive for these.QUESTION IS WITH ISLAM, ITS IDEOLOGY, ITS PROPHET & NOT DIRECTLY WITH MUSLIMS AS SUCH.
I have many question to ask to Mr.Karnad, who considers himself as the champions of muslims.Here you go:
Sometimes you also speak as the champion of secularism.Secularism and Islamic ideology can't go together.If want to test please look into the current world politics and show me one  Islamic nation where democracy is present.Poison and nector can't be together.

India is know for its plurality in puja, dhyan, mantra,devata and method of upasana.(Of late I have found that worship and puja are totally diffrent concepts therefore I am not using the English word here.).That plurality comes from Sanatana Dharma which includes todays Hinduism, Veerashaivism, Sikhism, Jainism & Buddhism.Sanatana Dharma can only uphold democrcy, voting right for women,general elections, newpress freedom.

Before I conclude, Mr.Girish Karnad can you name one incident when Naipaul raised these objections on Islam and muslims does any intellectual from Islam diffred with him.That silence from the muslim  world speaks lot of things.
Posted by Third eye at 3:28 PM No comments: