Here is a list of books written by me mainly in Kannada, the official state language of Karnataka,India.They are mainly into Hindu culture, Kannada literature and culture interpreted from an Indian point of view, on Indian nationalism,book reviews.They also include my doctral thesis on jaina sampradaya.books on tantra samparadya;translations from Sage Sri Aurobindo, scholar Prof.S.K.Ramachandra Rao and tapasvi Sri M.P.Pandit.Some of them are available some have to go for second or third edition print. 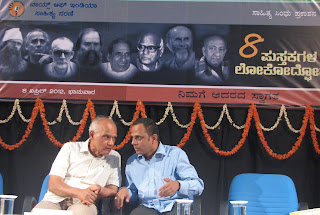 8. Dhammapada (2011): Introduction to Budhha dhamma and darshna and translation of 21 chapters (vagga) of Dhammapada of Gautama Buddha. (Tumkur University, Tumkur)