Do you know who loves you?

One day Maths
Teacher asked her students to list the names of the other students in
the room on two sheets of paper, leaving a space between each name.


Then she told them to think of the nicest thing they could say about
each of their classmates and write it down.


It took the remainder of the class period to finish their assignment,
and as the students left the room, each one handed in the papers.

That Saturday, the teacher wrote down the name of each student on a
separate sheet of paper, and listed what everyone else had said about
that individual.


On Monday she gave each student his or her list. Before long, the
entire class was smiling. "Really?" she heard whispered. "I never knew
that I meant anything to anyone!" and, "I didn't know others liked me
so much," were most of the comments.


No one ever mentioned those papers in class again. She never knew if
they discussed them after class or with their parents, but it didn't
matter. The exercise had accomplished its purpose. The students were
happy with themselves and one another. That group of students moved
on.


Several years later, one oaf the students was killed in

"Kargil" war
and his teacher attended the funeral of that special student. She had
never attended Funeral of a serviceman before. He looked so handsome,
so mature.

The place
was packed with his friends. One by one those who loved him took a
last walk. The teacher was the last one to bless .


As she stood there, one of the soldiers who acted as pallbearer came
up to her. "Were you Sanjay's math teacher?" he asked. She nodded:
"yes." Then he said: "Sanjay talked about you a lot."

After the funeral, most of Sanjay's former classmates were there.
Sanjay's mother and father were there, obviously waiting to speak with
his teacher.

"We want to show you something," his father said, taking a wallet out
of his pocket "They found this on Sanjay when he was killed. We
thought you might recognize it."

Opening the billfold, he carefully removed two worn pieces of notebook
paper that had obviously been taped, folded and refolded many times.
The teacher knew without looking that the papers were the ones on
which she had listed all the good things each of Sanjay's classmates
had said about him.

"Thank you so much for doing that," Sanjay's mother said. "As you can
see, Sanjay treasured it."
All of Sanjay's former classmates started to gather around. Arjun
smiled rather sheepishly and said, "I still have my list. It's in the
top drawer of my desk at home."

Prithwiraj's wife said, " Prithwiraj asked me to put his in our wedding album."


Then Deepali, another classmate, reached into her pocketbook, took out
her wallet and showed her worn and frazzled list to the group. "I
carry this with me at all times," Deepali said and without batting an
eyelash, she continued: "I think we all saved our lists"

That's when the teacher finally sat down and cried. She cried for
Sanjay and for all his friends who would never see him again.


The density of people in society is so thick that we forget that life
will end one day. And we don't know when that one day will be.
Posted by Third eye at 12:08 PM No comments:

Labels: care, care for loved ones, care for others, love 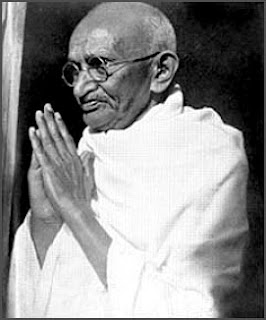 M K Gandhi was not a preaching Hindu as we found lot of them around us now.He was a practicing Hindu,who practiced the principles of Sanatana Dharma.He considered Bhagavad Geeta as mother.

In Karnataka we have a situation where more and more non practicing yet Hindus have taken the position of intellectual leadership.And they are opposing others/christians to stop converting Hindus.Upsurge of Hindu wave should not demean the great works of M K Gandhiji.He is stilla hero to millions of people of across the world.Hatred towadrs M.K.Gandhi is not a solution to conversion.

The great work of his -Hind Swaraj celebrated its 100th year but the event didnot become the centre of discussions neither in the electronic media nor in the print media.
Let us believe in God and our capability and work on the lines of great rishis like M.K.Gandhiji, Ananda Coomara Swamy and Sri Aurobindo.

IT encyclopedia from Kannada speaking public to English speaking world

I received an interesting bit of mail from a team who are working on building a IT vishcvakosha.

If you are working in any branch of IT please do share your valauable input.Here is a mail that I received from IT encyclopedia team.

Namaskara.
Please go through the attachments (request.doc/request.pdf) positively. Other
documents are for your reference and use. I have no other words to request you
to send artcles for IT encyclopedia at the earliest. In the extreme case please
send the English version.

Please send an e-mail to itvgroup-subscribe@yahoogroups.com and become a
member of this group. The group contains all informaton about the IT subject
encyclopedia, English-Kannada dictionary related to IT etc. You can download and
use the same.

I am eagerly waiting for the articles from you and your friends.
Expecting your article,
Thanking you
Yours
C V Srinatha Sastry
Posted by Third eye at 12:09 PM 3 comments: